Mom turned in my story for her writing class.  Her teacher gave her some ideas.

“A good idea, but I wonder if there is not too much dialogue here. The theme is strong, and the characters solve their own problems. It’s good to see Justin gradually unfold and become a little more confident. I imagine this story may be more successful if the emotions were more intense — a greater contrast between the fear and the joy. It’s an idea worth polishing, and it may have potential.”

This is our third draft.  You will have to imagine that the park is full of kids.

The sun warmed the spring air.  Justin and Manny hadn’t played at the park for six months.  They ran ten blocks to the park without stopping. Sounds of children laughing and squeaky swings filled their ears.

On one side of the park parents watched little ones play in the sand. Toddlers climbed the big steps up the little slide while parents held them as they scooted down slowly.   Justin got in a swing.  It felt tight.   No one pushed them higher than the sky.

“This horse tips all the way to the ground,” complained Manny.

Bigger kids lined up to go down the slippery slide.  They played on the big teeter-totter, and climbed on the huge ship, and swung on the tall swings that reached up to the tips of the trees.

“It’s a long way up there.”  Justin remembered he didn’t like going on the baby slide by himself.  He saw how fast this kids slid down the big slide.  On the baby slide he could hold on to the sides and go slow.

“Look other kids are going on it.  You’re not afraid are you?”

“I don’t,” Justin started to say he didn’t want to go on the slide.

“Let’s just climb to the top and look,” Manny persuaded his friend.

Justin and Manny waited in line. Soon it was Justin’s turn to climb the steps. Justin stood on the fifth step and looked down.

“This is high,” he turned around and told Manny. 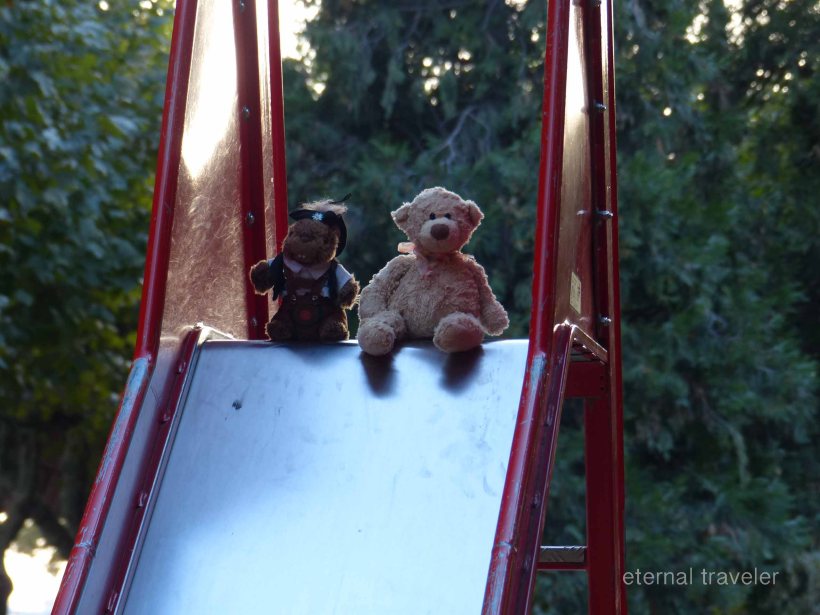 Justin got to the top.  He turned around and asked Manny to go first.  Manny sat at the top with him.  Justin wanted to cry.  Manny reached out and took his hand.  Justin pulled it away and turned away.  His cap blew off and landed in the sand.

“Push him!” the bigger kids shouted.

Two kids climbed up to the top step.  Manny reached his arm behind Justin to keep the boys from pushing Justin down the slide.

Manny stood up, turned around and squeezed down one step at a time. Justin followed him.  The two big kids on the top step shoved past Justin and went down before Justin could get down one step.  Kids crowded past him rushing to take their turn to slide. Finally they got to the bottom, and jumped off. They picked up Justin’s cap and tried different toys.  They tipped on the teeter-totter. Justin hung on tight.  Manny fell off.

“Are you hurt, Manny?”  Justin still felt shaky, but he didn’t feel like crying any more.

Manny laughed.  ”Sand is made for falling, Justin.  It’s fun.”

Justin went up and let go.  He fell off.

Justin laughed.  ”Sand is made for falling, Manny.”

Next they climbed on a ship pretending to sail around the park.  They turned wheels. They shouted into their loudspeaker fists.

Manny jumped overboard and pretended to swim in the sand.  Justin worried.  Manny’s hat came off and filled with sand.  Justin saw Manny jump and laugh.  He remembered the cool sand when he fell off the teeter-totter. Justin jumped off the front of the boat and landed in the soft sand.  He pretended to swim to the beach and play in the waves, too.  His hat came off and filled with sand.

“Were you scared, Justin?” Manny asked.

Moms headed home with their toddlers.  Older kids left, too. Justin looked at the slide.

“Do you want to try?” Manny asked.

Manny and Justin climbed to the top of the slide.  No kids came up behind them.  They sat a long time looking down.  The chilly wind blew Manny’s cap blew off.

“Me too.  Remember the teeter-totter? asked Manny.

Justin slid down the slide. He landed in the soft, cool sand. He laughed so hard he couldn’t move.

Manny landed face down in the sand.

They laughed and laughed.

So Manny and Justin went up the stairs and down the slippery slide until almost dark.

“I will not be afraid now,” said Justin as they walked home.

“We both are braver.” Manny agreed.

6 thoughts on “Manny and Justin Are Brave”

You'll never bark up the wrong tree if you leave a message for me. Cancel reply 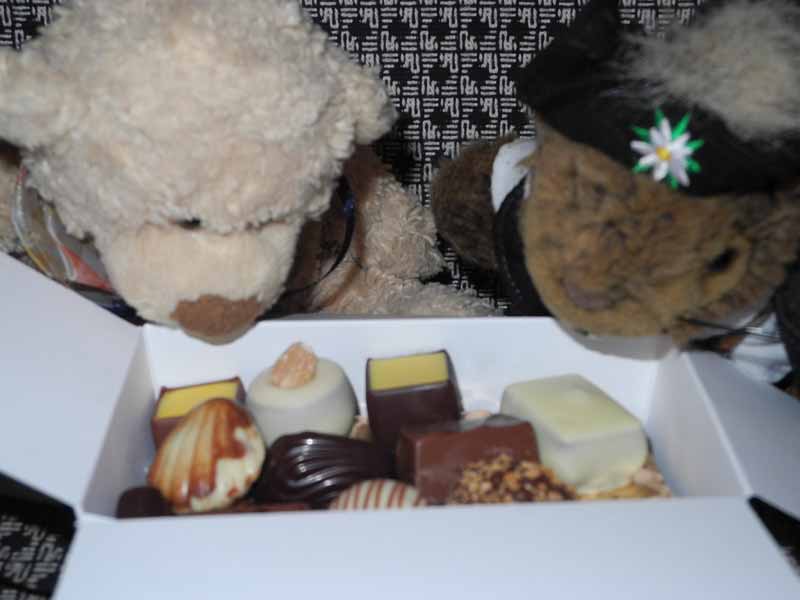 Manny and Justin Beaver in Bruges

Hi! I'm Manny, and I have fun! Most of the time I live at home with my mom and dad. The rest of the time I travel all over the world. I try to keep out of trouble. Sometimes I mess up.